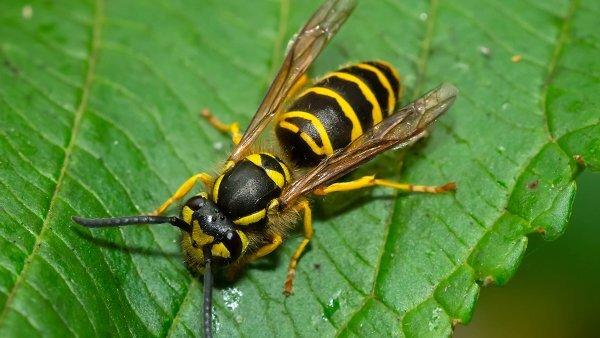 When the nest is disturbed, they boil out and sting people and animals near their nest.  People who are allergic to the venom they inject can die from one sting. Even people who are not allergic to their venom have pain and swelling at the sting site. Children can die from multiple stings. Because a nest can contain over 4,000 yellow jackets, getting stung badly is always a possibility. Adults sometimes find nests by mowing over them and are then chased and stung by the yellow jackets.

Yellowjackets Are More Dangerous At The End Of The Summer

Fertile yellow jacket queens hibernate over the winter and emerge in spring. They either dig a space to nest or take over a small mammal nest. The queen chews on plants and makes about 20-45 cells in the nest. She lays an egg in each cell. She feeds the larvae nectar and anthropoids and they become adults in about 30 days. As their numbers increase, the queen does not leave the nest again. At the end of the summer, the nest contains many more yellow jackets than it did in the spring. In late summer, the workers build large chambers that raise fertile males and queens. They mature and fly together to mate. The males fly off in large swarms over hills and vegetation. The females hibernate and start over in the spring. In Texas, some nests live over many years and can get as large as six feet around.

Yellow jackets are beneficial insects that feed on anthropoids. However, when they nest in and around homes, they become pests. This is especially true if someone who lives in the house is allergic to them. Yellow jackets are drawn to sugary foods such as soda, fruit, cakes, and pies. Make sure all your food and beverages are covered when you are outside. Check before drinking a soda that has been uncovered. More than one yellow jacket was swallowed that way, and the subsequent sting to the throat was life-threatening. Wear long pants, closed-toe shoes, long sleeves, and gloves when working in the garden or around any known nests. Make sure the shirt is heavy enough that a sting cannot penetrate it.

Because yellow jackets are so dangerous, especially to someone who is allergic to them, hire a professional to kill them. Call All-Safe Pest & Termite and we will kill the problem nests around and in your home. When you call, we will come out and give you a free inspection inside and out. We will then develop a plan and share it with you. After you agree with the plan, we will get rid of your yellow jackets, and any other pests that are present, if you choose. Call All-Safe Pest & Termite today at (972) 736-8876 and get rid of your yellow jackets safely.