The Answers To Frisco's Most Common Scorpion Questions

Home › Blog › The Answers To Frisco's Most Common Scorpion Questions

One of the scariest pests endemic to Texas,  are scorpions. They unfortunately are a common sight in our area. Some scorpions in the United States, like the Arizona bark scorpion, can be deadly, especially for vulnerable populations like the elderly and children. Fortunately, these scorpions live west of Texas, and seeing one in the Lone Star State would be exceedingly rare.

The most common scorpion in our state, the striped bark scorpion, is not as dangerous. There are no medically significant scorpion species in Texas. However, that doesn’t mean you want a house full of them, as even nonlethal scorpions can inflict a painful sting. Let’s talk about a few FAQs residents in our area have about these animals and how to keep them at bay. 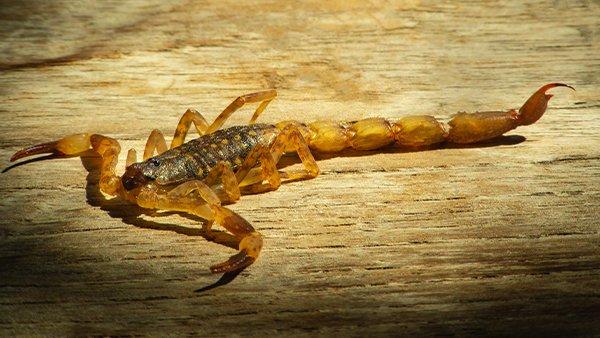 What Are Scorpions, And Where Do They Live?

Scorpions are arachnids, relatives of spiders, ticks, mites, harvestmen, and other orders. Like all arachnids, scorpions have eight legs and two body parts (the cephalothorax and abdomen). Unlike many other arachnids, scorpions’ front two legs form a pair of large pincers that make them look a little like a lobster. They also have a segmented tail that curls over their body and terminates in a long, venomous stinger.

Scorpions live mostly in deserts and semi-arid regions, though some species can be found in the humid southeast. These arachnids like to hide underneath things that keep them protected from predators and shelter them from the elements, such as fallen trees, boulders, and clutter. Bark scorpion species can also be found hanging out on vertical surfaces like trees, walls, etc.

What Do Scorpions Eat?

Scorpions are predators, and they catch prey by either actively stalking it or waiting inside holes until the prey comes close enough for them to spring out and catch it. Scorpions eat anything they can get their pincers on, including insects, spiders, and sometimes even baby mice or small lizards. Using their claws to grasp their prey, they inject venom from their tails to paralyze and eventually kill it.

How Venomous Are Scorpions, And How Serious Are Their Stings?

As we said above, some scorpions can be quite lethal. Fortunately, none of those scorpions are here. While a scorpion sting from any species can lead to anaphylactic shock in allergic individuals, most of the time, the sting of a native Texas species is not much more serious than a bee sting. It will hurt and swell, but ice packs and OTC (over-the-counter) pain relievers should be sufficient to treat stings. As with all insect and arachnid stings, watch carefully for signs of an allergic reaction.

What Should I Do If I Encounter A Scorpion?

If you see a scorpion outside, the general rule is just leave it alone unless it’s in an area where it could be a threat to people or pets (like on your porch or patio). If you find a scorpion inside, you can either smash it with something heavy like a shoe or catch it and let it go outside.

It's better to catch it with a cup or jar than your hand. However, if you have to handle it, wearing a pair of thick leather winter or work gloves should enable you to pick up a scorpion without being stung, but keep in mind their stings can go through most other clothing, including latex gloves. Also, remember scorpions are capable of stinging after they’re dead.

What Do I Do About Scorpion Infestation?

Scorpions are tough as nails, meaning they can be hard to get rid of if they’re already living and breeding inside your house. Fortunately, help is just a click or call away. Here at All-Safe Pest & Termite, we’ve been offering safe and effective scorpion treatment to the Dallas-Fort Worth metro area for over 30 years. Our technicians have the experience and the tools to handle any scorpion problem Texas can throw at them. So give us a call at (972) 715-1958 or visit our contact page to request your estimate today.