Why Is It So Hard To Get Rid Of Fire Ants Around My Plano Property?

Home › Blog › Why Is It So Hard To Get Rid Of Fire Ants Around My Plano Property?

Ants are common household pests that almost all Plano property owners will encounter at one point or another. When it comes to ants, however, not all species are the same. Different ants pose different risks, and some can be more of a problem than others. 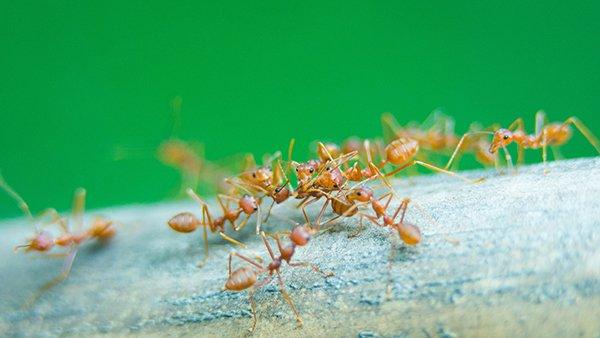 Fire ants are one of the most dreaded ant species in the area because of their tendency to bite and sting. These stings can be painful and leave a burning sensation. While you’re most likely to see fire ants outside where they build their nests in the dirt, they can also get close to your home or business and cause problems.

You’ll often see these ants coming out of what looks like small, dirt piles, and if you’ve been bitten by one, the sensation is hard to forget. Since fire ants can look similar to some other ant species, knowing what they look like and how to tell them apart is the first step to protecting yourself.

Here is a guide to a fire ant’s appearance:

Are Fire Ants Difficult To Get Rid Of?

The main concern most Plano property owners have with fire ants is their sting. This is definitely a problem as these stings hurt, and they often leave you with itchy marks afterward. In most cases, however, these stings aren’t particularly dangerous. They are unpleasant, but they aren’t likely to cause serious concerns unless you have an allergic reaction. However, you should pay attention if you’ve been stung to watch for signs of allergies. Pets are also susceptible to stings.

While their stings are the main problem, fire ants are also an invasive species that is hard to get rid of permanently. This is because they have huge colonies, and just one single colony can have over 20,000 individual ants. Their nests can be sprawling and span several feet in their underground tunnels.

The second reason they are hard to get rid of is that they have multiple queens per colony. So, even if queens are killed, the infestation can keep returning if even one queen remains.

Can You Get Rid Of Fire Ants On Your Own?

If you’ve noticed fire ants on your Plano property, you might be tempted to try to get rid of them on your own. But, because of the reasons mentioned above, this is rarely effective.

There are two main ways that people often try to eliminate fire ant colonies on their own:

Since fire ant colonies are so large, both of these options tend not to work very well. Fire ants will work together to protect the queen if the colony is threatened, so it can be extremely difficult for pesticides to kill the queens. And, if threatened, fire ants are more likely to try to sting as a defense mechanism.

The Only Sure Way To Get Rid Of Fire Ants

Because of their extensive colonies, trying to get rid of fire ants by yourself is usually a losing game. The only way to ensure fire ant removal is to contact the pest control experts at All-Safe Pest & Termite. Our experienced technicians can remove current infestations and also prevent them from coming back. To find out more about fire ant removal services, or to get a free estimate, contact us today.